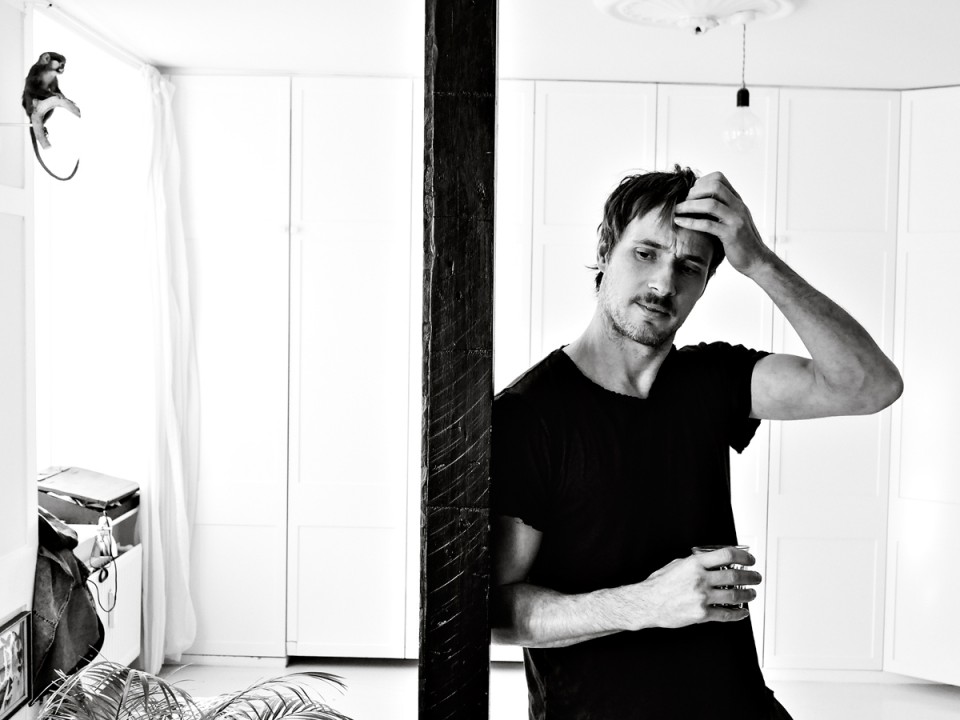 Danish artist Troels Carlsen works with figurative painting and drawing. Over the years he has developed a style of his own: starting with pages from an anatomy book for instance, or from old photographs and news paper clippings he adds painted forms and figures, building images that border the surreal.

We met Troels Carlsen for a talk in his flat in mid-city Copenhagen.

All work courtesy of the artist. For more information and individual titles please check out Carlsen’s website here.

CARLSEN: “I was always drawing as a kid – well more than average at least.”

C: “And then in the mid-eighties I discovered graffiti. That was a huge thing; you know for instance that whole thing with slime oozing down the top of the letters initialized a shift from a 2d to a 3d understanding of text.

It is a huge visual thing that graffiti appeared.”

C: “I skated a lot growing up as well, I was mostly a skater actually. And I didn’t think about it back then but there was a lot of political poetic statements and alternative modes of expression imbedded in that culture, not just the graffiti but the music as well.”

C: “Today it might seem as a cliché to have been inspired by skateboarding culture but it wasn’t back then when you were 13 to 17 – then you just got on the board and took off. All the painting and drawing stuff was something you did on the side it was mostly about skating.”

Looking back that whole thing was a solid ‘community’ that propelled me onwards.”

C: “I didn’t really take my drawing seriously until my early twenties. Guess I had to satisfy my social cravings before sitting down alone in a room drawing for hours on end.

You need to be able to add some life experience
– I did anyway.”

A smile turns into a grin.

C: “I really like the commentary style I’ve practiced for a while now, it was spawned from having worked with traditional ‘canvas painting’ for a long time, I had gotten a little bored with it. So it actually started out as kind of an opposition to the tradition.”

Carlsen works with a commentating style of drawing and painting where he adds layers on top of all ready existing imagery. For a recent series he has added flames to the edges of characters from military institutions and royal families posing.

C: “They’re actually old generals of the Spanish army. The added flames have many connotations and I don’t pretend to know them all, let alone define one as the true interpretation. But for me it’s partly about the aesthetic consideration: the way the flames caress static figures. It is an attention to fire as an element and to the tactility of painting as a medium.”

C: “It is definitely not to tell a story about the horrors of war or a call to action for burning down authorities; be it the military or the royal family. Rather it address’ the stoic calm of a person in a certain moment of time – the fiery edges, to me, open up a different atmosphere of intensity.”

In which direction do you see painting evolving?

C: “I don’t really know actually, but one thing is certain: it isn’t going away. Announcing painting as dead is pretty outdated these days.

Painting is a way of containing a stream of images and I think people need that.”

C: “What future paintings will depict will definitely alter as the world changes. I believe the world will continue to dwell on current events

– and in that sense artists are entrepreneurs.”