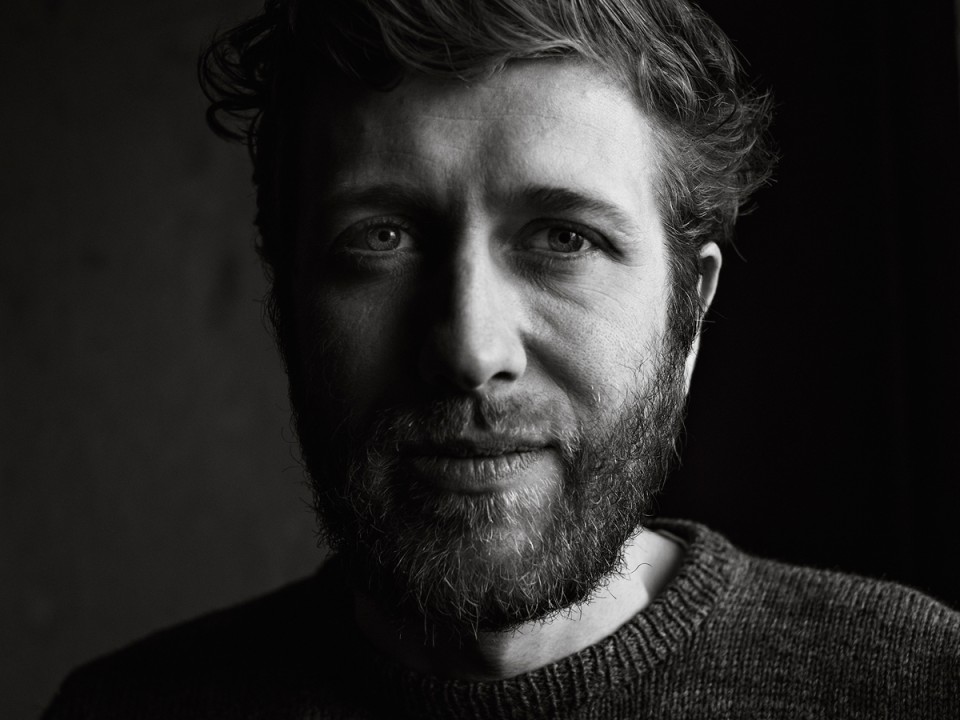 For his graduation piece at the Royal Danish Academy of Fine Arts  in 2011 Mads Thomsen (b. 1979) portrayed the life of Danish fishermen in linoleum cuts. The piece referred to the social realism tendencies of the 70ties, and Mads was particularly interested in the paradox between the open ocean and the confines of the ship
– now, years later, he works on an oil rig two out of eight weeks … kind of like being in prison, he says.

We met the artist in his Copenhagen studio to talk about lines through lino, logistics and the contemporary Danish art scene.

THOMSEN: “I had been working with sculpture up until my last year at the academy so in a way the shift to carving linoleum wasn’t that big: still carving and digging through material.”

Photos of the exhibition Krumt Rum at GL. Strand by Alastair Philip Wiper.

T: “For my graduation piece I travelled two months with a fishing boat to make these social realism / activism cuts that were really popular in the 70ties in Denmark.

I wanted to see if it was still possible to portray the laborer. Besides I found the glorified tales of the free sailor paradoxical:

On the one hand there’s the oceanic openness and consequent freedom of movement – a freedom, however, severely contrasted by the fact that you’re trapped in an iron box in the middle of the ocean.

From that perspective the whole phenomenon rather resembles a prisonlike condition where freedom and isolation converge – I really wanted to try to capture that.”

I’m at sea for two weeks and then I have a month off to work in the studio.”

He pauses. Gets out his phone, starts flipping through lonely snaps from the massive rig in the middle of oblivion.

T: “It is kind of like being in prison.

You get dropped of on this chunk of iron 40 meters above sea level and then you just wait for the chopper to come back two weeks later.

And you really look forward to seeing that chopper again!”

From his early work, characterized by a sort of new wave social realism, Mads Thomsen has lately turned his practice towards more open topics of fictitious character treating matters of a more universally psychological and spiritual character – and the mode of production is rather intricate.

T: “My interests at the moment are gradually tending towards fiction.

I use photo a lot in my preliminary studies. It starts of with me having a pretty clear idea of what I want to do but since I’m horrible at drawing I need some photos to relate to.

That results in a pretty circumstantial process of finding the right model, the correct cloth and location and then the whole day of shooting and the post-production – rather complex set up – but then I have the pictures I want.

T: “The fact that it is cut in linoleum gives the work a cartoonish trait, no matter what you do: even if the starting point was a photograph.

– And I really like that border between fiction and reality and linoleum is really apt for that: you have the black and white contrast and the fact that you, opposed to the camera, can have everything in focus at the same time.”

Thomsen’s work often consists of large scale figurative linoleum cuts – he is the proud owner of Denmark’s largest lino-press which messures 4 by 4 meters and thusly produce gigantic prints that enhance both the immediate bodily impact and the sculptural character of the work.

A more ‘immediate approach’ to the relation to works of art has according to Thomsen returned to the Danish art scene lately – a return he welcomes.

T: “I think there’s an element of play that has returned to the Danish art scene, maybe it’s because of the recession – whatever it is it’s liberating.

There are more trajectories than earlier, it has become legit to say: “this piece is just about surface and structure” and not having to relate it to some quote by Deleuze.”

T: “I think it should be legit for a work of art to please the eye without the viewer having to read a mile long text about the theoretical foundation beforehand to figure out what it is about.”

T: “It would be nice to affect a wide range of people, but in the end art is a surplus product which the world only thinks it needs if it decides that it needs it.”

T: “I am not that sure the world really thinks it needs more art, however, I insist that it does.”